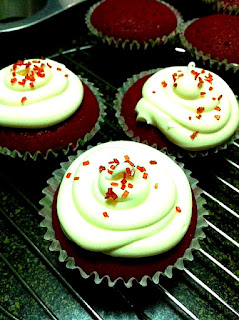 I made some last Christmas and it tasted like red velvet I guess =)  What does red velvet tastes like anyway?  For me, it's just an ordinary cake topped with Cream Cheese.  I've tried red velvet cupcake that tastes like banana cake too.  Imagine a red banana cake then top it with cream cheese frosting.  I guess it's just the color/presentation that makes people so attracted to it.  Even I, am a fan ;)


For my Red Velvet cupcake I followed Paula Deen's recipe.
It's a great recipe, the cake tasted good, it's not crumbly nor too dense, it was just right.  Frosting was too sweet, so I made a new batch and cut the sugar in half.  It was just right for my taste, it really depends on your preference.

For the Cream Cheese Frosting:

Preheat the oven to 350 degrees F. Line 2 (12-cup) muffin pans with cupcake papers.
In a medium mixing bowl, sift together the flour, sugar, baking soda, salt, and cocoa powder. In a large bowl gently beat together the oil, buttermilk, eggs, food coloring, vinegar, and vanilla with a handheld electric mixer. Add the sifted dry ingredients to the wet and mix until smooth and thoroughly combined.
Divide the batter evenly among the cupcake tins about 2/3 filled. Bake in oven for about 20 to 22 minutes, turning the pans once, half way through. Test the cupcakes with a toothpick for doneness. Remove from oven and cool completely before frosting.
For the Cream Cheese Frosting:
In a large mixing bowl, beat the cream cheese, butter and vanilla together until smooth. Add the sugar and on low speed, beat until incorporated. Increase the speed to high and mix until very light and fluffy.
Garnish with chopped pecans and a fresh raspberry or strawberry.
Cook's Note: Frost the cupcakes with a butter knife or pipe it on with a big star tip.